The Undertaker to Wrestle in O2 Arena: Tuesday, April 23rd

While Smackdown is heading to the O2 Arena of London in this month, the show is expected to be Phenomenal. It is for the reason that the legendary Undertaker is going to return to the capital of England for the first time in 4 years on coming Tuesday – and he is also about to lace up his wrestling boots. The Undertaker, also referred Demon of the Death Valley, who took his record of WrestleMania fights to an amazing 21-0 by winning his fight with CM Punk at MetLife Stadium of New Jersey on April 7th, will team up with Randy Orton and Sheamus for taking on The Shield in the main event of the Smackdown evening. 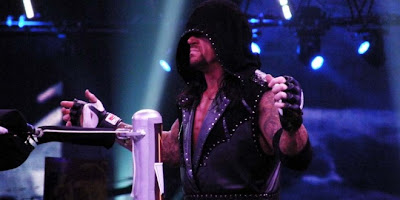 The appearance of The Undertaker at WrestleMania 29, in the meantime, helped the event turn into the highest grossing event in the history of WWE, making an enormous $12.30 million, as 80,680 fans from the 50 states of America and thirty four countries united at MetLife Stadium.

Attendance at the stadium was the second largest in the history of WrestleMania, just bettered by 93,173 fans who gathered at Pontiac Silverdome in the Pontiac, Michigan twenty-seven years ago for the WrestleMania 3. It was the event that saw the notorious clash between Andre the Giant and Hulk Hogan.

WrestleMania on April 7th, which was mainly evented by John Cena and The Rock’s duel for WWE Title, also broke the record for the maximum grossing entertainment extravaganza of MetLife Stadium that was a U-2 concert that netted $8.9 million and was held in 2011.

Chris Christie, the Governor of New Jersey, thanked all the people who came to New Jersey from all over the world for attending the WrestleMania 29 in the beautiful MetLife Stadium. He said that WWE arranged a show like none other and thrilled an enormous crowd. WrestleMania 30 is going to be held at Mercedes-Benz Superdome, New Orleans, LA on Sunday, April 6th, 2014. The city is home of 2009 Super Bowl and NFL franchise Champions, New Orleans Saints. The details on tickets will be published later.