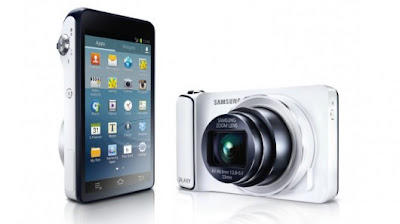 Just after Nikon announced its Android based point and shoot camera, Samsung has also tried its luck. The idea of a camera running on Android OS is not new. We have seen several such products from time to time in past however we were waiting for a major manufacturer to step in. Nikon announced its first digital camera with Android OS, the Coolpix S800c.

The hybrid or smart camera, which it has been dubbed, from Samsung features Android OS 4.1 Jelly Bean and comes with a 1.4 Ghz quad-core processor at its heart. The LCD screen incorporated on the back of the camera is a 4.8 inch touchscreen with multi touch capability. The shooting capacity of the device is 16 MP with BSI CMOS compact zoom technology. The camera lens has been designed to incorporate a compact zoom equivalent of 21x 23-481 mm on the front. Image stabilization and low light shooting will ensure high quality images in unfriendly and changing conditions.

The first look on the specifications and the camera itself resembles it to Galaxy S III, the latest smartphone released from Samsung a few months back. A surprising factor in the android cameras that we have seen is the inclusion of wireless connectivity features. WiFi as well as 3G, and in a different version 4G, have been incorporated in the device. It is nearly a high-end smartphone with the exception of ability to make calls and send messages.

Since the presence of Android OS also means the availability Google Play Store, so providing the wireless connectivity was necessary. Yes you can access the full fledged Play Store from this device and download apps from the complete collection of android apps through Wifi or 3G/4G connectivity.  The Samsung Galaxy camera also has a built-in app to edit your photos in the camera, you can also download and install additional apps for this purpose.

The hybrid Android cameras are designed to make photo sharing easier and quicker. Now you can share your pictures and videos with a single touch through Wifi or 3G/4G network with a single touch. Your pictures will be shared and uploaded directly from your Android device. Whether it is emailing, Facebook, Twitter, Instagram or anything other sharing service, it’s all made easy.

The 4.8 ClearBright HD screen features vivid colors and crisp graphics with a rich pixel density of 308i. The camera features a number of different shooting modes and effects for enhanced photography experience. It will come with a stock memory card of 8 GB You can expand it as per your choice. The video shooting comes in two moods; a 1920 x 1080 shooting mode with the frame rate of 30fps and another with 720 x 480 at 120 frames per second. Samsung Galaxy camera also features a built-in GPS which will be responsible for Geo-tagging your media shot with this device. A HDMI and microUSB output will provide more choices for data transfer.

Samsung has introduced a high quality product that will entice many camera and smartphone users. However, the price will determine its usability and success.