Medina is known as one of the holy cities of Islam. It is also known as “City of the Prophet”. The Prophet of Allah, Muhammad (Peace be upon him) migrated to Medina and stayed here for a few years before he triumphantly returned to Mecca, his hometown. Medina is commonly visited by pilgrims during Hajj. The city of Medina is located 210 miles from Makkah and about 120 miles from the red sea coast. It is situated in the Hejaz region of Saudi Arabia. You may travel to Medina, by air or by Bus from Makkah. Most of the Pilgrims prefer to travel by air but a special bus for pilgrims may take them from Makkah to Medina. If you are flying to Madina from any Middle Eastern State, then you may find some direct flight to Madina as well. SAPTCO (refers to Saudi Arabian Public Transport Company) is the bus service to take you anywhere throughout the country. 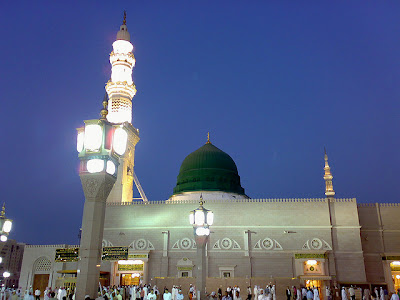 Since the city is only visited by Muslims for the religious purpose, most important place to visit in the city is Prophet’s Mosque or Masjid Nabawi where pious Muslims offer their prayers. Men can visit the burial location of the Prophet Muhammad and pay their respects anytime during the day. Women can only visit after the time of Fajr or dawn and the time of Duhr or afternoon. Adjacent to Masjid Nabawi is Jannatul Baqi, a large cemetery, where most companions and family members of Prophet are buried. At some distance is Masjid Qiblatayen. This mosque is the place where Prophet Muhammad was ordered by God Almighty to turn his face towards Kaaba in Makkah from Masjid-e-Aqsa in Jerusalem while offering the prayers; Masjid Gamama where Muhammad (PBUH) one prayed for rain; Masjid Jumua where first Friday or Jumua prayers were offered by Prophet; and Islam’s first mosque, Masjid Quba.

The streets around and leading to Masjid Nabawi are filled with stores that sell goods of every kind. People visiting Madina usually purchase Abayas, prayer rugs (many with magnets that point towards Kaaba), rosary beads or Tasveeh, caps, images of mosques and the holy city, religious cds, Holy Quran’s copies, clocks with sound of Azan (call to prayer) for about five million cities, etc. as mementoes to carry along as gifts for friends and family when returning home. Most popular of these are Dates from this city.

There are numerous Western, African and Asian restaurants in the city which offer a variety of food for everyone. McDonalds, Pizza Hut, KFC and several other fast food restaurants are serving there in Medina.

When it comes to accommodation, you may find various hotels and resorts in Madina. If you are looking for luxurious hotels, you must go for the five star hotels. There also some cheap hotels in Madina, which offer pretty affordable accommodation. The best would be to make some research in advance so you know where to find economical hotels in the city.