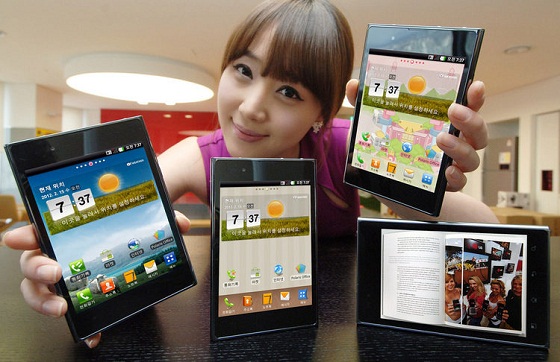 The smartphone market has grown rapidly in the past few years and has enabled a number of companies to make and break their fortunes while competing. Initially, the market was dominated by the likes of BlackBerry and Apple, but it lasted only until Google launched its Android Operating System. Since then, a myriad of companies have entered the market and have launched their phones. However, it is Samsung Electronics that has made the most of the OS and has reached the top of the smartphone market, even beating Apple Inc. with its Galaxy range of smartphones.

Even though other manufacturers have tried, but none of them have been able to challenge the success and dominance enjoyed by the Galaxy phones. But, now it seems that LG has finally managed to do so. The company has been striving hard to find a foothold in the ongoing smartphone battle taking place between various companies. The South Korean firm is determined to take on the flagship smartphones of its competitors like Samsung, HTC and Sony and has therefore launched its new smartphone called the G2, which boasts a Snapdragon 800 processor and was highly anticipated in the market.

According to the CEO and president of LG, Dr. Jong-seok Park, technology cannot be deemed innovation if it is without empathy. He made this statement at the launch of the G2. This new smartphone of the company has a 2GB RAM and a 2.26 GHZ quad-core processor. Optical image stabilization technology has been incorporated in the smartphone and it also has a 13 mega pixel camera on the rear end. Measuring 5.2 inch, the phone shows off an edge to edge screen. A 24 bit/192kHz sound is offered by the G2 in order to enhance the music and video experience of users. Apart from that, LG has also brought a change in the traditional design pattern by moving the physical buttons on the back instead of the front.

The model is operating on Android 4.2.2 Jelly Bean. A lot of user friendly features have also been installed into the phone by the manufacturers such as the Answer Me sensing that will answer the calls automatically when it’s moved to the ear. No button will have to be pressed. A calendar event can also be created by a text link with the help of a simple text message if it comprises of information like time or location. The quick remote feature of the gadget also allows people to control all their electronic devices with the use of the infrared port.

The plug and plop feature of the G2 is also very useful as the former shows whether the device has been plugged into the right port and the latter shows the icons of the app that are most commonly used. A security feature is also part of the phone that will keep the data confidential when the device is with a second user. All 130 wireless carriers all over the globe will be offering the model in a couple of weeks.