Virtualization means creating something virtual or computer-generated instead of actual thing. This technology is now being used widely throughout the world because of its advantages. It is mainly used in organizations in IT department to save the cost of buying hardware like monitors, hard drives, RAMs etc. Hardware Virtualizationmeans to create a server with high specifications depending upon number of computers and the work you want to take from them. It basically hides the physical existence of the computer and shows only the abstract appearance. It is very useful to be used in companies where the employees have work to do on computers because you save yourself from the trouble of maintaining, updating and protecting the computers which you have given them to use in the office. The server that is made for Virtualization supplies the internal memory that is needed for the performance of the computers. We build a powerful server with specifications i.e. hard drive, RAM and processor etc. that are many times of that a normal commuter. 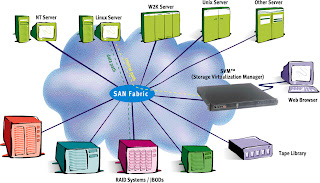 Network Virtualization is a process in which we divide the bandwidth of a single high speed internet and supply it to different computers normally for office use within a building. The bandwidth is divided into channels which are independent of each other and are capable to be assigned to a specific server. This reduces the burden and cost of providing internet to every computer as every person on computer gets the same privileges, authority and bandwidth.
Storage Virtualization is becoming more popular in organizations where the work is of heavy nature that occupies large space on hard drive. We build a SAN(Storage area networking) in which a hard disk that is several times of the size of a normal hard disk is installed on a local server. Through that server we create partitions and allocate storage space as much as we want to any computer. This is a good way to protect our database because we are able to keep a check on our employees’ actions and the files and folders they access. We are also able to change and modify the security settings whenever we want and this helps in making our database secure and protected from unauthorized access. Virtualization could prove to be very helpful in large organizations where a lot of computers are needed for office use because only one server will be needed to control all of the computers.