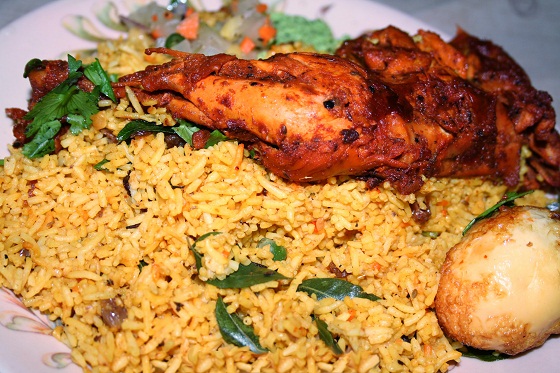 Hyderabadi Chicken Biryani is an Indian dish created mainly with rice and chicken, though other meats can be used.  Though the recipe is usually time consuming, the dish is fairly easy to make. It involves a lot of spices, so be warned. Usually the dish is hot, but you can add as many or as few chilies as you want to adjust the heat. Typically, Indian food is spicy, but of course those with weaker stomachs may not be able to handle the heat.

First, marinade the chicken in the following mixture for at least two hours”

Then, start on the rice.

For this part, you will need:

Soak the rice for a bout 30 minutes. Then, in a large pot, bring the rice to a boil. Cook for about 5 minutes. Drain the rice, and add the marinated chicken to the pot. Add a few mint leaves, about a tablespoon of coriander, and another ¾ cup of fried onions. Cook on medium for about 20 minutes. Then bring down the heat and allow the mixture to sit for about five minutes. Finally, ration it out and enjoy the delicious Hyderabadi Chicken Biryani.