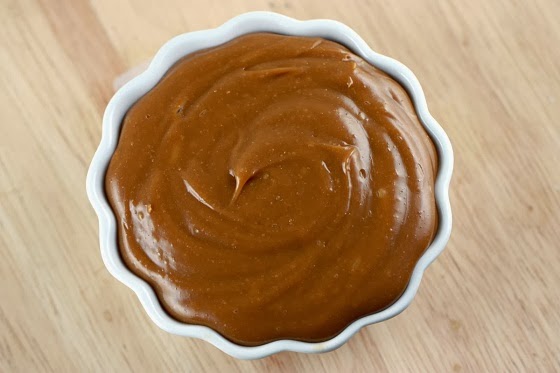 “Dulce de leche” (“Candy of Milk”) is simply milk and sugar, cooked until a brownish sweet pasted is formed.

There’s a lot of controversy surrounding its origin. But history says that dulce the leche was born on July 17 of 1829 in Argentina, where it’s considered a national treasure. According to the legend, General Lavalle and Juan Manuel de Rosas (who were enemies in the context of Argentina’s sedition war) were to meet in the city of Cañuelas to negotiate the end of the war. Lavalle arrived to Rosas’s camp but Rosas was late for the meeting, Lavalle, feeling very tired, took a nap in the nearest bed. He was seen by one of Rosas’s female servants, who was making “Lechada” (Hot milk with sugar). The servant was outraged when she saw Lavalle in Rosas’s bed, and went to get Rosas, forgetting the milk with sugar over the fire. When she came back, she found the milk had turned into a brownish paste. Someone unknown tasted that paste and found it delicious.

To make it in the oven, you have to empty a can of condensed milk into an oven-proof dish and tightly cover it with foil. Then, put the covered dish in a bigger casserole pan and fill it with water until it reaches three quarters of the covered dish. Cook it at 425 degrees F for an hour to 90 minutes. Remember to check the water level every half an hour and add more if it’s needed. When the paste looks brown and like a caramel, you must take it from the oven and whisk to smooth it. As per chef Naomi Robinson, it is his favorite way to prepare it since it gives a smooth creamy texture in short work.

To make it on the stove, you must remove the label from the can first and pierce three holes forming a triangle on top of the can. After that, place the can in a sauce pan and fill the pan with water three-quarters of the way up the side of the can. When the water reaches its boiling point, keep it there for three to four hours (Closer to four for a thicker texture). Once it’s ready, allow it to cool slightly, pour the paste in a bowl and whisk it. According to Naomi Robinson, “This method takes the longest, but it allows for the most control over the consistency”.