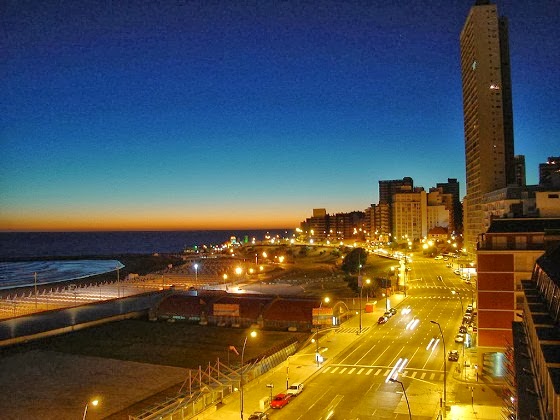 Patricio Peralta Ramos founded the town that would become a city on November 14 of 1873. He named it Mar del Plata, which means “Sea Of Silver”, because he was marveled by the silver tone of the sea when the sun reflected in the water.

In its origins, Mar del Plata was a luxury touristic villa for Buenos Aires aristocracy. By 1940, though, middle class tourists began replacing the aristocratic ones. Ten years later, Mar del Plata was known as the national touristic city. Since so many people went (and still go) there on vacations, Poet Enrique de Tomas Wing nicknamed it “The happy town”.

The best beaches are located in Punta Mogotes area (4 km of golden sand). That zone has 24 balnearios (seaside resorts) in the private area of the beach. In those balnearios you can rent a tent that come with a table and chairs. The tent will be extremely useful to protect yourself from the sun if you go to the beach around noon, since you should avoid solar exposition from twelve pm to three pm. The prize of the tent includes certain amenities like swimming pools, tennis courts, aerobics lessons and different games, depending on the balneario you choose. In the balnearios there are also shops, restaurants and cafes.

If you don’t want to spend any money, you can always spend the day in the public area of the beach, which is just by the shore.

The beaches located in La Perla area are the closest to the commercial part of the city. This can be very convenient if you want to go to the shopping mall after spending the day at the beach. Besides, La Perla’s balnearios, the tents are the cheapest. However, I would avoid those beaches if I were you. They are often way to crowded and dirty.

In the South area of Mar del Plata, 40 minutes away from the downtown, you’ll find the most exclusive beaches. These beaches go from the lighthouse to the border with General Alvarado department. They have calm waters surrounded by sand dunes, canyons and cliffs with abundant vegetation. The main disadvantage is that the balnearios are extremely overpriced.

If you don’t wish to go to the beach, you can go downtown and walk down the pedestrian street that’s full of life and shops. Downtown also has two shopping malls and several theaters. Another option is to travel to Sierra de Los Padres, which is only 15 minutes away from Mar del Plata. Once there, you can eat in the best parrillas (barbacues places), shop for beautiful crafts or do horse backriding.