BlackBerry Armed For Battle of Smartphones 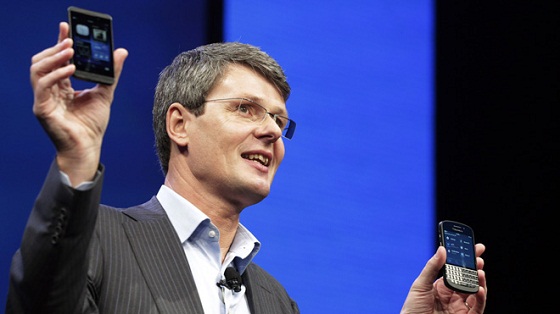 Chief Executive of BlackBerry Ltd, Thorsten Heins has no doubt about where the battle of smartphones will be waged for the upcoming years. He has spent the last 18 months trying to turn the floundering company around. According to the CEO, the most innovative and competitive market is the US because that’s where the real wars are being waged. The other location is the emerging markets where the battle seems to be intensifying over time. This opinion was expressed by Mr. Heins this week at the BlackBerry keynote conference. The first salvos were fired by the Waterloo-Ontario based company earlier this year for regaining its lost market share in the form of the Z10 and Q10 smartphones.

The second volley came this week in Orlando when the Q5 smartphone was revealed by BlackBerry. The company is hoping that this particular smartphone will appeal to the middle-class customers that exist in emerging markets such as Africa, Asia, Latin America and the Middle East. The price point of the smartphone hasn’t been announced by the company as yet, but it is expected to be rolled out in all the emerging markets in July of this year. The aim of the company is to recapture the magic of the Curve. This was the company’s best-selling smartphone based on the old operating system.

With this smartphone, BlackBerry is taking on lower priced models of smartphones that are sold by other companies in the market. Heins explained that the company has to build a complete portfolio that completes all the price ranges that exist in the market. For now, the company doesn’t have any plans of launching the Q5 phone in North America, but plenty of attention was attracted by this budget-priced smartphone at the annual conference of the company in Orlando. White, red, pink and black versions of the Q5 were displayed at a booth in the conference trade.

The onlookers were curious about the phone and wished to feel, touch and fiddle with the smartphone. A BlackBerry retail carrier trainer, Matthew Clark said that they had been given a separate booth at the conference and they were the busiest people there. A slightly weaker processor is boasted by the Q5 and it has a less memory capacity. Unlike the eight megapixels camera on the Z10 and Q10, this model has a 5 megapixel camera and its casing is also cheaper than the other models.

Moreover, the phone is also lighter as it weighs only 120 grams as compared to the 139 gram of Q10. However, the most striking feature of the handset is the BlackBerry keyboard. The keyboard of the Q10 was different and resembled that of a guitar. In contrast, the keyboard boasted by Q5 is similar to the renowned keyboards of the BlackBerry Bold and Curve line of smartphones. It was explained by a BlackBerry employee that some of the roots of the previous operating system of the company had been incorporated in the new smartphone. Nonetheless, it has the new BlackBerry 10 operating system and has excited the public.