$111 Million Deal Between Sharp and Samsung! 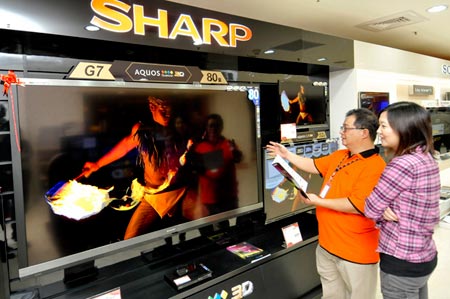 In a rare move, Sharp, the Japanese firm, announced that it has entered into a $111 million worth capital tie-up deal with Samsung Electronics, the South Korean manufacturer, which simply underscores the declining fortunes of the electronics giants. According to Sharp, Samsung will be purchasing shares of the company that are worth 10.4 billion yen. The Japanese company is currently attempting to repair its balance sheet and has therefore allowed Samsung to become the biggest foreign shareholder with a three percent stake in it. The shares of Sharp went soaring with the announcement of the deal and ended at 14% higher. Samsung’s share price was also increased by 0.65%.

Sharp has stated that this deal will do a lot to alleviate its troubled finances and will also give ‘mutual trust’ between the two companies a boost. This is because Samsung Electronics is looking to make use of the liquid-crystal display technology of Sharp, which is leading the market and can be used for its mobile phones and tablet computers. As opposed to its Japanese competitor, the South Korean company has moved several steps ahead in the market and has become the top information technology company of the world. A record profit of 7.04 trillion won was reported by Samsung in the last quarter of 2012.

In regard to the deal, the South Korean giant said that the deal with the Japanese firm will be a strong foundation for ensuring the steady and continuous supply of LCD panels from a number of sources. Sharp has also entered into a separate deal with US chipmaker Qualcomm for the purpose of capital injection that will be around 4.94 billion yen. Moreover, the Japanese company is also the supplier of LCDs for Apple Inc., the direct rival of Samsung Electronics in the mobile phone and tablet market. According to the reports last month, an expected investment by Hon Hai Precision of Taiwan in Sharp had been shelved. The Taiwanese company makes gadgets of Apple Inc. in China.

However, a spokesman of the company had said that the negotiations were still under consideration. Chief economist with SMBC, Hiroshi Sakai said that the acceptance of capital injection by foreign firms is a major downfall for Sharp and also other Japanese manufacturers. He said that it is very shocking news for Japan because Sharp had retained the position of leader in the panel industry, but it had fallen behind whereas its competitor, Samsung had moved quite ahead.

He further asserted that the deal did not come as a surprise in regard to Samsung, which is dominating the global electronics market. The chief also added that such deals were likely to increase as other Japanese manufacturers were also struggling in the market. Sharp is being hammered by rivals in its liquid-crystal display business because they are offering products at a lower cost. Last year, Sharp obtained bank loans by putting up its Osaka headquarters as collateral. Likewise, its rival Sony is also being forced to sell its headquarters in Manhattan for the purpose of raising cash.