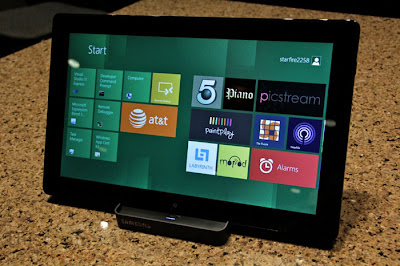 The competition in smartphone and tablet market is getting tougher and tougher. Every competitor is trying its best to edge out its rival by bringing innovative and unique products to the customers. Samsung has once again stolen the show. This time, by announcing the first ever windows phone 8 smartphone and tablet. Everyone was expecting it to be Nokia but it turns out to be Samsung against all odds. The announcement comes just a few days prior to Nokia’s announcement of its flagship Windows Phone 8 smartphones. Samsung has named its first Windows tablet RT ATIV. The device runs Windows RT which is a part of Windows 8 and has a decent array of specifications making it one of the best tablets in the market.

RT ATIV comes with a 10.1 inch LCD displaying a fine High Definition resolution of 1366 x 768. It is a very slim device at just 8.9 mm of thickness and weights just about half a kg at 570 grams. We can sense the superb built quality, design and portability of the device by Samsung. The device has 2 GB of RAM along with optional 32 or 64 GB built-in memory with option of further expansion. The device also features a 5 MP rear camera that is able to take very good photographs. It also comes with a LED flash that is not very common in the tablets. A very capable front camera of 2 MP is also included for video calling. So whether it is shooting, video making or video calling, it’s a joy with RT ATIV.

RT ATIV will feature Microsoft Office Home and Student 2013 RT preinstalled. It is for the first time that these programs will come preloaded in a tablet. This will add great convenience to the users, which they will be looking forward to. If you want a taste of Windows Phone 8 as well as Office Home and Student 2013 RT, this is the way. Battery time has been a problem with modern devices. We have seen a lot of devices offering very little in terms of battery timing. To tackle this problem, RT ATIV comes with a powerful 8200 mAh battery. It device will give you plenty of running time. So you don’t have to worry about charging again and again.

Samsung devices have always showcased superior connectivity, especially wirelessly. So is the case with this device. Bluetooth 4.0, NFC and WiFi are the wireless connectivity capabilities of this device where as microUSB and HDMI output are included for media and data transferring through cables. As far as the price is concerned, no pricing and availability info has been released as yet, however according to the speculations it can be priced around 400$ at its release. So if you want to have one of these, start saving now and muster up your financial muscles.

The new windows tablet from Samsung promises great user experience and smooth performance thanks to its eye catching design and impressive specifications. It can potentially upset the sales of the new iPad. However, the facts will surface only when the tablet is released. So you have to wait until the RT ATIV is unleashed into the market.