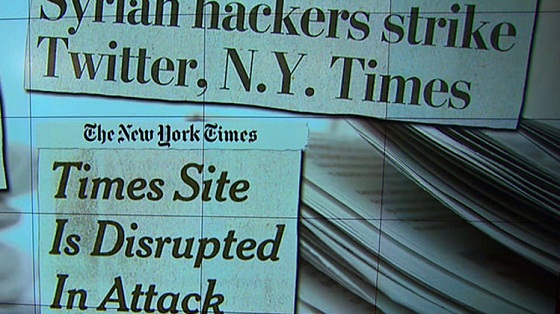 Most of the time, the internet is a blessing for people because it has made lives much easier and convenient. However, there are times when it can also be a curse. One of the most serious downsides of the internet is that it gives people the opportunity to hack and get access to confidential, private and personal information. A damaging hack was carried out on Tuesday on the websites of Twitter and the New York Times and they are still suffering from problems related to this attack. Hackers maliciously edited the domain name details of these two websites and hit them severely.

The responsibility of the attack was accepted by a group of hackers that are supporting the Syrian President Bashar al-Assad and are known as the Syrian Electronic Army (SEA). The group has carried out several hacking attacks, but this one is the most severe and serious one so far. Major media companies have become the target of these hackers in recent months and these include some prominent names like BBC, CNN, Washington Post and the Financial Times. However, in this latest attack of the SEA, they used a technique that caused more sustained damage and the Huffington Post hit was also cited by the news and comments.

Melbourne IT was the hosting company that managed the domains, which were attacked. The company stated that it is taking additional steps and providing greater security for keep the domain details safe. It was the DNS i.e. domain name system information that was compromised for the attack. Typically, this DNS is used for directing web traffic to a specific server that holds the website being searched by the user. In simple terms, this means that users can browse the web easily by using easily remembered websites instead of complete IP addresses.

The domains of the New York Times and Twitter were registered with Melbourne IT and the SEA was able to access their system. The DNS details were changed by the hackers so instead of heading to the websites of Twitter or New York Times, people were taken to a website that the SEA was hosting. In the case of Twitter, a separate domain called the twimg.com was targeted by the SEA as this is where the social network stores all its styling codes and image data. This meant that the social network was active, but a number of pages were incorrectly displayed.

Twitter made a statement and clarified that user data hadn’t been compromised in any way. The attacks on both the sites were publicized by the SEA with the use of its Twitter account where it posted pictures of its activities. A reseller was blamed by Melbourne IT for the breach, which is basically a third party that uses the company’s system for selling domains. The company said that the log-in credentials of the reseller were obtained by the SEA and that’s why they were able to access the system and inflict the attack. These hacking attempts on important media websites seem to be increasing gradually.