The Battle Between The Continents In Olympic Games 2012 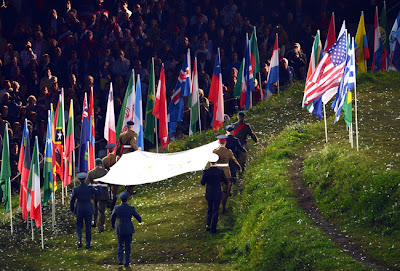 When you look at the medal chart of Olympic Games 2012, you will notice something. You will notice a battle between different continents which of course cannot be mentioned on a medal table. However, it lies in the eye of the beholder whether he is able to see the amazing trends on an Olympic medal table or not. If you look at the latest medals won by first three countries, you have China on top, USA on second and France on third. Now, since we have been talking about continents and now you know the top three entries in the medal chart, do you realize something?

Yes, you have three different continents boasting on first, second and third ranking. Now, if you see the logo of Olympics it has 5 rings depicting the 5 different continents and also reflecting the most common colors present in the flags of the countries located in these continents. Since Olympic Games are all about sports, we are talking about competition. Medals are awarded to the winners so we are talking about even tougher competition. The real fight is about making your continent proud by winning the most number of gold medals or total number of medals.

There wasn’t much contribution from Asian countries in the past Olympic Games but with the passage of time, Asia started to take part in more and more games, and picking up bunches of medals from the table. China has always been the best candidate from Asia to win the highest numbers of gold medals. However, after the Olympics of 2000 things started to change abruptly and China gradually started to move into the top position on the charts. Looking at the latest proceedings and medal chart, China is still topping it with a total 15 gold medals on the sixth day of Olympics since 27th of July.

With further countries such as Korea, Kazakhstan, Russia and others, Asia has high chances of winning most number of gold medals or total medals. Italy, Great Britain, Germany and France are the hopes from Europe to take it on top with highest number of gold medals. USA is already standing on number 2 and trying to surpass China as more games are played and finished. However, looking at the chart of 2008 Beijing Olympics where China had a big lead on its biggest opponent USA it feels that China alone will be enough to win highest number of medals for Asia.