Take a Trip Into the History By Visiting Istanbul 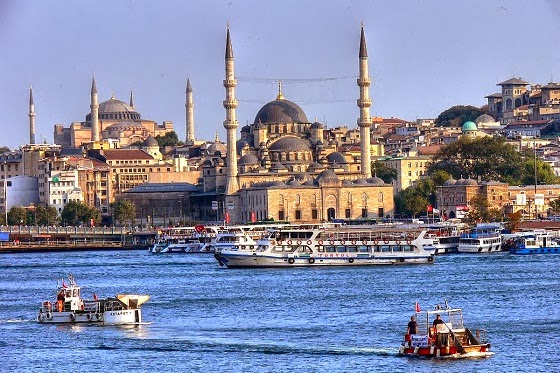 Visiting Istanbul is a dream of many and that’s because this city is where reality shocks the imagination of most travelers. It’s a place of clear light and sweet air. Some most prominent places of Istanbul for tourists, places without which Istanbul tour is nonetheless complete, are Aya Sofya (Haga Sophia), The Blue Mosque (Sultan Ahmed Mosque), the Grand Bazaar, Galata Tower, Turkish bath (Suleymaniye Hamam), Jurassic Land, Istanbul Dolphinarium complex, Feshane Children’s Entertainment Park, Maiden Tower, Princess islands, Miniatürk, Topkapı Palace, Istanbul Archeological Museums, Pera Museum, Giant Aquariums, Istanbul Modern, Takism Square, Ortakoy, Dolmanbache palace, so on and so forth the list is endless.

The Blue Mosque (Sultan Ahmed Mosque) is a historical place built in order to compete with Hagia Sophia by Sultam Ahmed located in the Sultanahmed neighborhood. The beauty of domes, semi domes and minarets of the mosque mesmerizes the visitors.Aya Sofya was built between the years of 532 and 537, it was a church then a mosque and now a museum located in Sultanahmed neighborhood also known as Haga Sophia. It has fine architecture, glorious interior view, it is the magnum opus of Byzantium architecture. Galata Towers which rises high above the city and is a popular destination for tourists all year round, build in 500 AD to keep an eye on the enemy. Church of St. Savour in Chora (Kariye Müzesi) was originally built as a Byzantine church, later converted to a mosque in 1500’s and from 1958 it is a museum. It is known for its series of beautiful mosaics and frescoes which are considered as some of the best examples of Byzantine art and architecture. Topkapi palace is one of Istanbul’s most popular places and it served as a home to Ottam Sultans from 1465 to 1856. It was converted into a museum in 1924.

Shopping in the City of Istanbul

Like every city in the world Istanbul also has its place to shop and that is the Grand Bazaar. The Grand Bazaar is unique and different from other shopping centers of the world because of its huge market. The success and satisfaction of the customer pertaining to prices depends upon the individual bargaining skills. The foundation stone of Grand Bazaar was laid around 15th century, originally conceived as a trading center for those bringing in products from exotic lands.Takism square is also one of the finest places for shopping. It was built to collect and distribute water in different parts of the city. Apart from shopping there are numerous things Takism tower is known for like entertainment and restaurants because of which the street is packed throughout the day until late into the night. It is the hub of modern Istanbul and always crowded. The tunnel and the tram, built in 1875 are the main attractions for the tourists

Galata Tower functions as a night club in the evening, apart from the delicious food of its cafes and restaurants it also gives panoramic view of Istanbul. Takism square located in European part of Istanbul is also a fine place to dine. There are many restaurant and hotels like the Ceylan InterContinental and the Grand Hyatt Istanbul, offering a wide variety of dishes, which includes Chinese dishes as well as Italian and Japanese dishes. The kebabs of Turkey and the lamb soup at Bebek are something which is always on the menu for the tourists.