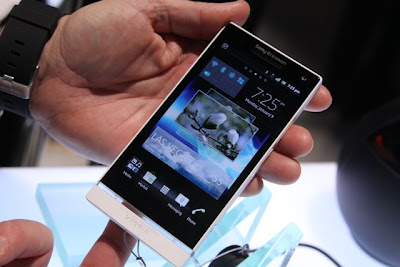 We rarely see the trend of upgrading a good smartphone by the manufacturer. Instead, it will launch sequels to the predecessor. It can be a good idea on manufacturer’s part to upgrade its devices. Sony has realized the importance and has taken the initiative of doing this by upgrading their 8 months old flagship device, the Sony Xperia S. The new updated model is known as Xperia SL.

Sony Xperia S was released as flagship smartphone which received appreciable response from the users. Sony have decided to release its updated model, the Xperia SL. The Xperia SL is an improved version of already popular Xperia S. Sony has added a number of features and update the already ones to the next level. The new device will now feature Andriod OS 4.0, Ice Cream Sandwich, along with Sony’s own Timescape UI for better user experience.

The device is just about a centimeter thick and weighs slightly les than 150 grams. The size of the LED backlit LCD has been kept as 4.3 inch which offers 16 million rich colors and a resolution of 720 x 1280 pixels. Sony calls it a 10 point multi touch capacitive screen which is scratch resistant as well.

The Xperia SL misses out on a quad-core processor, however it won’t make a big impact as the 1.7 Ghz dual-core processor has sufficient punch to keep it going smoothly. Sony has opted to keep the RAM at 1 GB and release it with 32 GB non-expendable storage capacity. The camera on this device is an improved one with 12 MP of shooting capacity. It comes with a complementary LED Flash and autofocus. It can shoot 1080p Full High Definition videos with ease. Another camera on the front has been incorporated for general video calling through network as well as applications like Skype.

The device lags a bit in terms of connectivity as there is no NFC or wireless charging support and the Bluetooth version is also not the latest. It features Bluetooth 2.1 technology and Wifi for wireless connectivity while standard microUSB v2.0 comes with the USB on the go support which can be a pleasant little surprise for some users. Other array of features include Accelerometer, proximity sensor, compass and gyroscope. All these built-in stock features will provide the much needed freshness and newness into the device which shall be appreciated by the users.

Currently there has been no announcement regarding the price, availability and release of the device. However, it is speculated that it will enter the market in Last quarter of the current year.
Sony Xperia SL promises to be an improved device with lots of new and refurbished features.

However, the lack of quad-core processor, RAM, non-expendable storage and unimproved connectivity may prove to be a bit of a letdown. The price of the device will finally determine the fate of this particular smartphone. Whether it proves to be a hit for Sony or ends up just another smartphone in the market, we will have to wait and see.