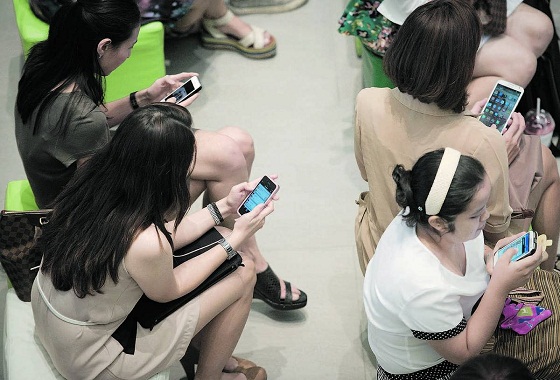 The global smartphone market has undergone rapid growth in the past few years. Beginning with the launch of the first iPhone in 2007, the industry has become extremely widespread with smartphones from various companies topping the charts. However, even though there are several players in the market now, it remains dominated by two companies; Apple and Samsung. The American manufacturer and South Korean giant respectively hold considerable market share and are constantly striving hard to beat each other in the long run. Nonetheless, there have been statements made by analysts that the smartphone market has reached its peak and is now stable after growing rapidly.

However, the industry research outfit, IDC has stated that the two main players of the market i.e. Samsung and Apple are basically losing their grip on the smartphone market because other firms like Lenovo and LG are gaining market share gradually. Apple launched its iPhone 5 and Samsung introduced its Galaxy S4, but neither have been able to break or make records like their predecessors. The fiscal third quarter earnings were released by Apple Inc. this week that showed the company had managed to sell around 31.2 million smartphones in this three month duration. According to Apple, this is a record figure for this quarter.

But, IDC was quick to rain on Apple’s optimism by stating that the figures showed the second lowers growth of year on year, which has occurred in the past four years. In the second quarter, the iPhone maker only accounted for a 13.1% share in the smartphone market globally. With a 30.4% share, Samsung was way ahead of Apple Inc., but IDC still put a negative spin on the position of the South Korean firm in the global smartphone market. According to the estimates of the research firm, 72.4 million smartphones were shipped by Samsung in the second quarter.

Even though this figure seems impressive and was primarily driven by the success of the Galaxy S4 smartphone, it isn’t good enough because in comparison to the last quarter, the market share of the company declined by 2.4%. The research manager of IDC, Ramon Llamas said that a significant share of the market was held by Apple and Samsung, but they weren’t the only vendors. As a matter of fact, more vendors are targeting the high end smartphone market as new devices are being introduced and launches are being made.

He said that people would indeed be comparing the new devices with the iPhone and Galaxy phones, but the competition still refuses to bow out of the market. Some unlikely aspects have caused a slump in Apple and Samsung in the form of ZTE, Lenovo and LG. A larger year on year growth was enjoyed by these three firms quarterly as compared to their rivals. Llamas also ended that the opposite end of the spectrum cannot be ignored either as low cost smartphones have also managed to gain traction in the market. They are another reason why the high end devices of Apple and Samsung are suffering.