Great Dane In A Trailer 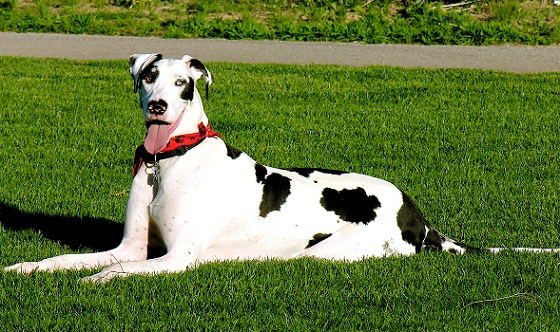 Many people, if not most, pick out a dog by the looks it has, without thinking about what environment is best for the dog. The environment, of course, not only includes the interior living space, but also the exterior, as well as the proximity of neighbors. People look for the cutest dog, the best protection, their favorite breed, or, Heaven forbid, the cost. Yes, that actually happens. Some people will go shopping for a dog, wanting a small dog, but buying a medium sized dog because it is more in their price range from the few they see that day. People can accidentally be cruel to the pet by being impatient. “I want a dog NOW!” Adults do this impetuous act almost as often as children. This could end up being a cruel situation for the dog, not to mention tantamount to disaster to the carpet and furnishings of the buyer’s dwelling.

I was visiting a friend that had recently purchased a mobile home. It was a new, beautiful, sizeable mobile home. That friend had a cat. The neighbor, however, had a Great Dane. It was really the largest Great Dane I had ever seen. It was as large as a small pony. It was a pretty dog. It was white, with many black spots. I saw it walking freely in my friend’s yard, and I gasped. I asked about it. My friend informed me that the lady seemed to be handicapped, may have wanted a guard dog, and that he only saw the dog about once a month, outdoors. Sure enough, on each subsequent visit to my friend’s trailer, I never saw or heard the dog again.

I finally asked my friend if the dog was gone. He elaborated that the dog was still there, because he could hear it running through the trailer as late as midnight, almost every night. We both speculated about how the dog could run in a trailer that would have to be full of excrement. Not only was the thought of that disgusting, I was very saddened about how the poor dog must feel cooped up in a trailer all the time, living amid its own waste. That environment, of course, was too small.

Likewise, a dog can be too small for a home. An easily frightened dog sometimes hides, and if you had a Chihuahua in The White House, you may not find it for days, as it cowered in small places that make it feel safe.

A beagle barks like a howl, and howls like a hyena stuck in a bear trap. Your neighbors might murder you. A miniature dachshund, which is all the rage, is very stubborn about housebreaking, and also barks for ten minutes after the mailman has left. They are often obstinate to any sort of bark training. A Dalmatian is supposed to run nearly eight miles a day. Who on earth could see to that? You better have a farm.

A dog that gets no exercise can suffer from depression, just as human beings can. They gain weight, which is a tragic and unfair thing to do to the dog. They suffer from back problems, and heart ailments, just to name a few.

When you decide to select a dog, you can look at websites about each breed you think you may like. The American Kennel Club even has information about how to match your dog’s needs to your environment. You can read about the needs of nearly a hundred breeds on their various websites. Do your research. If you do not care about your dog’s wants and needs, please get a goldfish.