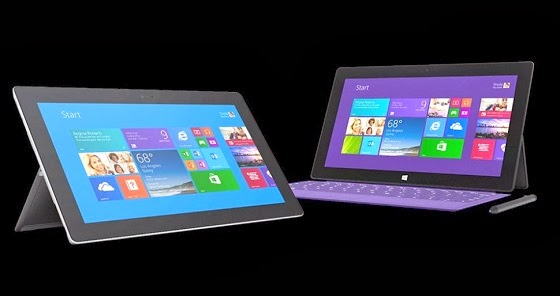 On Monday, the software giant Microsoft unveiled an update made to its Surface tablets that include the simpler Windows Surface 2 and the full Surface Pro 2. The burgeoning niche of the tablet market is being dominated by Apple’s iPad and a healthy level of rivalry offered by products based on Google’s Android OS. Not wanting to miss out on this loaded ride, Microsoft launched its own take in the form of Next Gen Surface tablets and chose to use its own products for promoting Windows RT and Windows 8. Last year, the company made its first attempt, which was highly disappointing, but its back again with enhanced internal specifications.

The Microsoft Vice President of Surface introduced the Surface Pro 2 as a tablet design of a complete laptop. He said that in contrast to its predecessor, this tablet boasted a 20% better battery life and 50% enhanced graphics. The screen can be tilted by the users at two different angles with the ‘dual position kickstand’. The Surface 2, on the other hand, is operating on a stripped-down version of the new Windows and succeeds Surface RT. However, as per the company, this device is faster, lighter and thinner. A Tegra 4 Chip obtained from Nvidia is included in the Surface RT.

As opposed to its predecessor, it is three times faster and boasts a full HD 1080p screen. The battery life has also improved by 25%. Microsoft also introduced some new things in regard to accessories that include a Power Cover, a dock for the tablet, a thinner Type Cover and also a new-back-lit keyboard. The company has attached a price tag of $499 to the Surface 2 32 GB version and running on Windows RT and this is $50 less than the original. $549 is charged for a 64GB version. Meanwhile, the price of the 64GB version of the Pro tablet will be available for $899.

The tablets are available for preorder and will be hitting the stores on October 22nd of this year.  It was also mentioned that the latest processor of Intel that’s called Haswell has been used in the Surface Pro 2. This means that as compared to 90% of the laptops available in the market, this tablet is way faster and is 20% quicker than its predecessor. Also, a 75% improved battery life has been given to the Surface Pro 2 in contrast to the original. A 46% improvement in the color accuracy of the Surface Pro 2 is another advantage.

The sales of the first Surface tablets launched by Microsoft were dismal, to say the least. In July, the company had to make a write off worth $900 million for the Surface RT tablets and the company later stated that only $853 million had been generated in terms of revenue from the Surface RT and the Surface Pro combined in the year since they made their debut. In the second quarter of this year, only 4.5% of all tablet shipments were that of the Windows RT and Windows 8 devices.