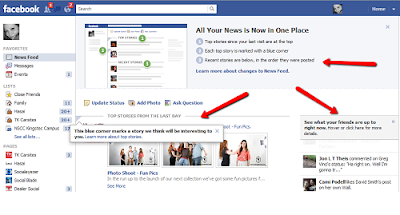 Facebook Inc. is a public company, which is the owner of the most popular social media network of the world. Today, the largest social network that exists is Facebook, which is said to have more than one billion registered users spread out in all parts of the globe. This social network was launched in February of 2004 by a bunch of college students, Mark Zuckerberg and his friends. Initially, it was restricted to Harvard students only, but it greater expanded to various other colleges and then eventually to the public. Last year, the company finally went public. The social network has changed considerably since it was launched.
Enhancements and improvements have been made to its layout and overall design. It can now be accessed via mobile application as well. Recently, the company announced that the design and layout of the news feed would be changing. News feed is one of the most important pillars of the social networking website. The news feed will be revamped by the company and posts will be filtered into various strands. Instead of the single feed that exists now, there will be multiple feeds that divide the content users see such as music and photos. The feed has mostly remained unchanged since 2009.
Now, however, according to reports, larger images will be an integral part of the change. At present, only a thumbnail picture of the business, group or individual who posted is available in the news feed features update. Separate feeds are also offered, but the problem is that they are not very easy to locate. For instance, in the apps section in the side bar, it is possible to find the music feed. However, it is mostly filled with music that friends are listening to. Insiders have revealed that users will be able to alternate between feeds by tabs below the search box, which are being incorporated in the new design.
The purpose of the revamping of the news feed is to satisfy the insatiable desire that people all over the globe seem to have for the largest social network. People will devote even more hours to logging onto Facebook if there are more lists for them to sort through. Another benefit of the redesign is that the bigger pictures will also be more of a lure to advertisers. Moreover, with multiple feeds, it would mean that the sponsored stories will have more room to spread out.
The newsfeed has come at a very crucial and testing time for the social network. It recently announced that teenagers were gradually getting bored with Facebook. The company feels that its long term business could be affected because its facing competition from ‘cooler’ apps like Instagram and Snapchat. As the social network is approaching its 10th anniversary, it revealed its annual report in which it was highlighted that teenagers and youngsters are giving up on the multi-billion dollar business. The revamping is just part of the strategy of the social network to draw youngsters again towards the social network by satisfying their interests more efficiently.