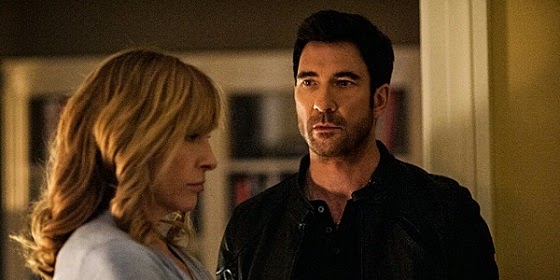 The show stars Toni Collete (Best known for “The United States of Tara” and the movie “Little Miss Sunshine”), Tate Donovan (Best known for his role in “Damages”) and Dylan McDermott (Best known for “The Practice” and “American Horror Story”). Hostages is about a world-class surgeon called Ellen Sanders (Collete) who is about to operate on the president of the United States. In the eve of the big surgery, she’s taken hostage along with her husband (Donovan) and her two kids. The family is taken hostage by a group of terrorists led by a rogue FBI agent called Duncan Carlisle. Duncan tells Ellen that her family will be murdered if she doesn’t kill the president. In a sort-of unexpected twist, the hostage-takers seem to be working for the president’s Chief of Staff and have people working for them who are infiltrated in the secret service.

At the end of the pilot, Dr. Sanders secretly gave the president a blood thinner. By doing that, she got the surgery postponed for two weeks. That means she has fourteen days to get herself out of the horrible situation she’s in. Since each episode covers one day and it’s been said that the show will have fifteen episodes, the day of the big surgery will collide with the finale.

“We normally like orders of 22 episodes”, said Jonathan Littman, TV chief of Jerry Bruckheimer. As per him, when something that is this intense and thrilling, it’s difficult to bring out twenty-two [episodes] and keep the suspense up.

The big question is: what to do after those 15 episodes? It’s not like the family can be taken hostage for months. The critics and the audience seem to think that this story won’t work in the long-term, and that it would have worked better as a movie. Producer Jerry Bruckheimer responded saying that they are doing fifteen [episodes] and hope for getting not just 2 seasons but many more.

Last May, advertisers were shown a sizzle reel in advance. The reel included scenes not seen in the pilot. This made critics wonder whether the producers shot scenes from additional episodes to prove CBS executives that the series can last for several seasons. Jeffrey Nachmanoff, writer/director of the show, admitted that the additional footage was meant “to show everybody there is a series here.” He also explained that they shot sample scenes for something coming in future; for giving the illusion they had shot the series already, which is technically impossible.  He then also added that they we were asking CBS executives that they would like to do something different for their network and that they’ll meet CBS in middle.

At this moment, though, it doesn’t seem very likely that the show will be renewed for more than one season. The critics haven’t been nice and the ratings have been pretty low. The pilot only had 7.41 million viewers and the second episode had only 5.96.