The names of Google and Apple are well-recognized in the technology world. Both companies are American multinational corporations that have become extremely successful over the years and are said to be one of the most valuable companies of the world. Apple Inc. is famous for its products like the iPad tablet computer, iPod music player and the iPhone smartphone. Google, on the other hand, offers internet related services like search engine, cloud computing and advertising that contribute to its accomplishments. These companies have also become rivals as Google Inc. is the owner of the Android operating system, which is used in smartphones, and is eating away at Apple’s market share. 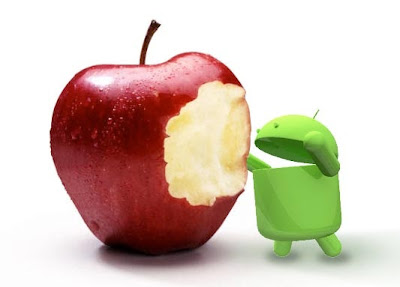 Moreover, the Nexus tablet of Google Inc. is targeting the iPad of Apple Inc. Nonetheless, in this competition, Apple remained one step ahead of the internet giant. However, that doesn’t seem to be the case anymore. The role of superstar in the tech world has been usurped by Google Inc. because of a stunning rally in its share price while the iPhone maker is left floundering. In recent weeks, Google Inc. has managed to achieve its all-time high and it has a share price of $831.52. So far, this year, the company’s stock has risen by 13%. What’s more is that this is a tenfold rise from its initial offering price of $84 in 2004.

Part of the success of Google is due to its Android OS, which has become popular at the expense of Apple Inc. Even though Google Inc. offers Android free to mobile makers, it enables the company to offer its products and services to wider range of users. An analyst of Gartner said that the negatively surrounding Apple Inc. was in fact, impacting Google in a positive way. Last year, Apple Inc. had traded as high as $700, but has slumped to $431 this year, which is a 35% reduction.

The analyst said that Google Inc. had a lot going for it currently and was luring customers into its ecosystem quite easily. Some analysts are also of the opinion that Apple Inc. might just be beaten by Google Inc. to a symbolic level of $1000 per share. The share price of $1000 has been set for Google by analysts at Jeffries as they are of the belief that the company will benefit from a wide range of services. This will vary from the traditional web search ads and refers to mobile ads and online shopping.

The analysts assert that the internet giant holds the largest market share in the most prominent and growing markets, due to which it can achieve a lot more. The company is the leading advertising platform and retains the position of being the top search engine. 70% of the smartphone market is held by the Android OS of Google. What’s even more interesting to note is that around 50% of the company’s revenue is generated from outside of the US. Hence, the company can take advantage of accelerated revenues in Africa, Africa and other markets outside the United States.