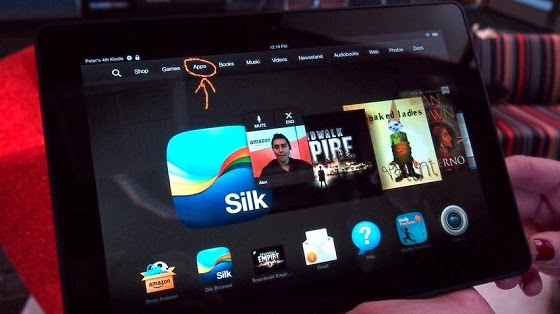 Like the smartphone market, the tablet market is also a profitable niche for various information technology companies. While Apple Inc.’s iPad is currently leading the tablet market, it is still on the receiving end of some healthy competition from the tablets that are based on the Android OS of Google Inc. and also from the Kindle line of Amazon. Now, it seems that Amazon is once again strengthening and refreshing its lineup of tablets with the introduction of its new devices that are called Kindle Fire HDX. It is reported that these devices are significantly lighter and faster as compared to the previous generation of tablet computers of the company.

Furthermore, as compared to the older models, the newer ones, which are available in 7 inch and 8.9 inch versions have more colorful and sharper displays and they also have more pixels for every inch when compared with the most recent iPad. Moreover, Amazon has also provided a new feature in the new Kindle versions for those people who are unfamiliar with tablets. Mayday is the name given to this feature and it enables users to call upon a live customer service representative who can be seen in a tiny video window. New features can be explained by the helpers.

Also, they can provide guidance in regard to the on-screen hand scribbles and also troubleshoot problems at the same time. As a matter of fact, the device can also be controlled by the helpers from afar. The feature was introduced to reporters on Tuesday by CEO Jeff Bezos and he called Kindle Fire HDX totally unique. He also added that this feature took advantage of the exceptional customer service infrastructure of Amazon and its massive cloud computing. The device is simply building onto the superb customer service reputation of Amazon Inc. Bezos said that people did not have to be scared of their device.

A demo was also shown in which the on-screen customer service representative was asked to recommend a good application. Angry Birds: Star Wars II was recommended by the representative and instructions were also provided for setting time limit on different activities performed by children. Hence, the new Kindle tablets have been upgraded in a variety of ways. Not only that, but Amazon has also taken steps for reducing the price of its entry level tablet that will measure about 7 inch. This device is called the Kindle Fire HD and has 8 gigabytes of memory and will carry a price tag of $139.

Previously, a price tag of $199 had been given to the base HD model, but it had boasted a memory of 16 gigabytes. The price of this tablet makes it $20 cheaper in comparison to Kindle Paperwhite, which is the latest dedicated e-reader launched by Amazon. A new body made of magnesium alloy has been given to the Kindle Fire HD just like the HDX models. According to analysts, the reduction of the price of the Kindle Fire HD will benefit Amazon’s position in the tablet market more than its new features.