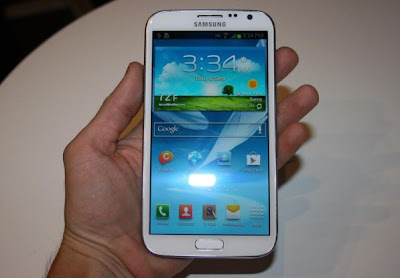 Almost one year back Samsung released a device which has been dubbed by many as ‘Phablet’ Galaxy Note. This nickname has been given to the device due to its characteristics which resembles it to a tablet while being a phone. Galaxy Note came with a stylus and a larger, wider screen that made it look like a tablet. It was intended towards the users who are looking for a tablet as well as a phone in a similar device. It caters the needs of both the professional as well as personal users in a single go.

Nearly 10 months after releasing Note, Samsung is back with its sequel device, the Galaxy Note II. Galaxy Note marked immense sales and profit for Samsung. People loved it and embraced the unique and innovative idea warmly. Now it’s the time to go one step ahead with Note II.

Following the huge success of Note, there is a lot of optimism among the users prior to the release of its successor. Galaxy Note II will be the first device to be released with Android OS 4.1 Jelly Bean. Currently no other device comes with Jelly Bean preloaded. However, the option of upgrade is there in most of the high end android devices.

If we look at the design of Note II, one can say that it resembles Galaxy S III. However the screen size is bigger. The new Note II will feature a 5.5 inch super AMOLED screen which will boast 16 million colors and 720 x 1280 pixels resolution. The capacitive touchscreen with multi touch functionality will come with the protection of Corning Gorilla Glass 2. The enormous screen size of Note II offers a two in one functionality of a smartphone as well as a tablet.

Galaxy Note II will also include a stylus as with the Note which they call it the S pen. However this time it will be slightly thicker and longer to go with the increased screen size. Despite being a Phablet, Samsung have managed well to make it as slim as possible with just a thickness of 9.4 mm. It also features superb shooting capabilities with 8 MP rear camera with a complementary LED flash and autofocus. The camera easily supports 1080p of full HD video shooting. A secondary front facing camera of 2 MP will do an excellent job for video calling. Skype would be a joy with this device.

AS far as the processing power is concerned the Note II has a very strong 1.6 Ghz quadcore A9 Cortex processor that comes with a supportive Exynos 4 Quad chipset. This is one of the most powerful processors that we have seen on any android device so far. The memory of Note II consists of 2 GB of fixed RAB and an option between 16, 32 or 64 GB of storage. That’s not all, you can still expand the memory of your Note II device via memory card.

To add the pompous, exquisite and very impressive list of features the Samsung Galaxy Note II will also showcase some very exciting features such as Air View, Accelerometer, Barometer, Gyroscope, Proximity sensors and a built-in Compass.

If you are looking to buy one of Samsung Mobiles, visit MyGiftShop.