Can Serena Bring Gold Medal For USA In Olympic Games 2012? 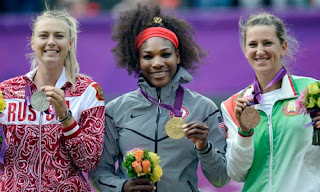 Olympics are all about medals and the country that has the highest number of gold medals rules the chart in the end. Thousands of athletes compete to get the gold medal and earn a name and respect for their country but only a few succeed. Every country sends the best men and women it has in sports to compete against the players from around the world. When it comes to tennis, USA has some of the best athletes who have earned respect for USA for years by winning record grand slams and Olympic titles as well. Serena and Venus Williams, the two sisters have won several grand slam titles for USA and took the responsibility of bringing back some gold in Olympic Games 2012.

Venus Williams the elder sister has already won 1 gold medal for USA in 2000 Olympic Games in Women’s Singles. She has also won gold medals in Women’s doubles with her sister Serena Williams in 2000 and 2008. Having won several grand slam titles and names written in history for winning most number of grand slam titles, there couldn’t be any better candidates from USA to compete in the Olympic Games 2012 for gold medals. However, Venus Williams who was a bigger hope in the context that she had already won a Women’s Singles gold medal in Olympics for USA in 2000 has been eliminated from the women’s singles competition.

Venus Williams lost against Angelique Kerber from Germany in two straight sets without putting up a solid fight in the third round. Though from her matches in the first and second round it was looking that she was in great form but things didn’t quite work for her in the third round. Contrary to that, Serena Williams is now looking right on the track and better than ever with her extremely powerful strokes and tremendous attacking, which she revealed in the match against Vera Zvonareva. Beating Zvonareva 6-1, 6-0 Serena has sent the threatening signals to players facing her in the next rounds. Not to forget the rocketing 12 aces in the match and brutal 32 winners she played in the match.

The way Serena Williams has played against the number 13 seed, it looks that USA can count on her to win the gold medal and remove one block from the way of coming close to China in the race of gold medals. While Serena is looking in great form, Kim Clijsters and other players are coming strong too. Let’s see who bites on the gold medal in the Olympic Games 2012 because once you lose the opportunity, your next chance is 4 years away from that day.

For more on Olympics, visit OnzineArticles.

OnZineArticles.com is an online blog determined to help people with tips and suggestions on almost everything. In addition, OnZineArticles.com is open to authors, writers who either want to share their opinions, ideas, opinions, observations and experiences with others, or want to submit articles to create back links to theirs or their clients' websites. Submitted articles must adhere to the OnZineArticles.com's editorial guidelines and policies.
View all posts by Onzine Articles →
« The Battle Between The Continents In Olympic Games 2012
‘The Trailer of Call of Duty (Black Ops 2) Multi-player Is Here! »